Feb 2022
M5 Motorway Junction 10 STC team updated the comments on the proposed changes to the  M5 Motorway, Tewkesbury Rd and the new Link Road to West Cheltenham - document is stored under documents tab

Dec 2020 - Elms Park 1st phase for 260 homes at Swindon Farm - still not fulfilling the promises on sustainabilty.
​​
October 2020
M5 Motorway Junction 10 - STC Response submitted regarding the consultation on the improvement scheme around M5 Junction 10.
The scheme elements include an ‘all movements’ junction at M5 Junction 10, complemented by a new link road to the west of Cheltenham, and improvements along the A4019 and at Coombe Hill junction.  www.gloucestershire.gov.uk/J10.
While we are in favour of the improvements in general, there are some key elements that have been missed such as a link road from the M5 to Cleeve, a park and ride and sufficient linked safe foothpaths bridleways and cycleways to ensure real opportunity for sustainable transport in the wider area.

September  2020
Government publish the proposed revision to planning for the future
assets.publishing.service.gov.uk/government/uploads/system/uploads/attachment_data/file/907647/MHCLG-Planning-Consultation.pdf
There are 23 proposals for the change to the Gov planning policy - some that the team favour and some that give us some concern. Responses on the public consultation are due by 29th October.

June 2020
Elms park phase 1 planning proposal is open for public consultation - please comment on Cheltenham Borough Council Website
Land at Swindon Farm, Cheltenham - Application 20/00759/FUL
Key concern areas:
Initial access has been designed from already busy Manor Road not Tewkesbury Road.
​No clear plans for road infrastructure improvements yet  - highways have asked for 6 month delay
​No evidence that this development is sustainable - no examples of green energy or carbon neutral set up.
​This is the first phase of the largest ever new development on previously green belt land, so it should be used as a national example for UK planning. It should not harm the environment or existing community.
​
May 2020
Annual walk - although distanced we had a lovely walk and beautiful sunshine in our glorious countryside.

Elms Park planning proposal - no news.
Highways England have requested for a 3rd 6 month delay before plans for a development of around 4000 homes can be released as still work continues on highways capacity and traffic assessments.
16/02000/OUT |
Up to 4115 new homes providing a range and choice of mix and tenure, including affordable housing (C3) and elderly persons accommodation (C2 up to 200 rooms), 24 ha of employment generating uses including 10 ha B1 business park (up to 40,000 sqm), a hotel (C1 up to 100 rooms), and mixed use centres providing retail uses and community facilities (A1 - A5 up to 6,150 sqm, D1/D2 up to 1,000 sqm) A transport hub and public transport inter change, primary and secondary school education (D2), new areas of green infrastructure including areas of play sports hub, woodland planting, allotments and habitat at creation, creation of new means of access onto Tewkesbury Road and Manor Road, new footways and cycleways, and drainage infrastructure. | Elms Park Tewkesbury Road Cheltenham Gloucestershire
​
We do however expect a smaller planning proposal for 260 units with access from Manor Road. - details will be shared when available or will be visible on Cheltenham planning website

April 2020
We have provided our constructive comments on the latest Transport plan - we are determined that any development planned has effective safe transportation established across all methods of transport for the new and existing wider communities. 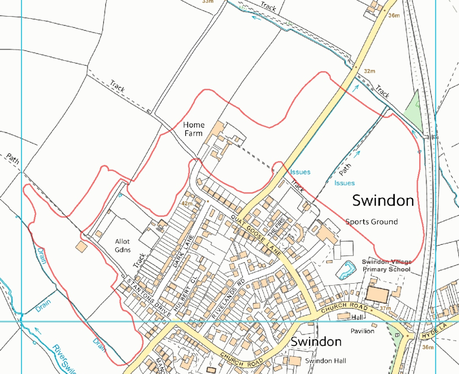 May 2019 - Our 12th Annual Walk
Our passion to protect our precious green spaces is still there. Thanks everyone!

Save the Countryside team and supporters for the 12th year had a lovely afternoon on 19th May, walking the beautiful fields at the North West of Cheltenham between Swindon Village and Elmstone Hardwicke.  This event has become such a lovely local community event, enjoying our beautiful countryside and meeting our friends and neighbours.

Much of this is destined to become new housing development in future years, but the team are delighted that a continuous area had been agreed to be retained as local green space.
Following years of collaborative work on the matter of local green space, we thought we had reach a good reasonable conclusion at the end of the Joint Core Strategy. In 2017 at the end of the JCS, the Government inspector confirmed that we were to retain an agreed area of 24.5 hectares of  local green space around Swindon Village to retain its village identity, protect precious green spaces. This area is less than 7% of the approximately 356 hectares removed from the green belt for housing in the JCS strategic allocation. She removed 500 houses from the volume of housing expected in the area and stated that the exact details be finalised in the Cheltenham plan.  This was approved by Councillors so everyone was aligned. (see plan attached) However at the end of The Cheltenham Plan, a new government inspector assigned with the task of verifying the soundness of the Cheltenham plan has decided to retroactively revise the local green spaces assigned by the JCS Inspector and has recommended a far smaller area of less than 1/4 of the size. To say that the team and the whole room in the hearing on the Cheltenham plan were amazed would be an understatement.

This has not been accepted by Swindon Parish Council, Save the Countryside and other concerned groups who have reminded Cheltenham Borough Council planning team of the thorough detail that the teams have gone through to ensure that the Local green space is in line with National planning policy framework.
We wait with baited breath to ensure that the fair and robust (all be it lengthy) process of the JCS to enable the local green space has not been discarded by 1 swift move by another inspector.  Again we are pleased to have the support of our councillors on this matter.


March 2019
Whole issue of Local Green Space around Swindon Village reopened again due to a new planning inspector! after we had got it resolved 2 years ago!
Heres Helen Well's article in Swindon Village New about the issue.

Still fighting for our Local Green Space
It has been quite some time since my last update, but with Government Inspector hearings, real life and my real job, in fact things have been far from quiet. So here is where we are:
18 months ago, we had confirmation from the Joint Core Strategy (JCS- the document which agreed development strategies for Cheltenham Gloucester and Tewkesbury) that our local green space wrapping around the village from north of Dog Bark Lane round to the railway line east of Seasons, that we had fought so hard for was agreed. The team gave a sigh of relief that all our hard work had paid off.
The Map was included in the policy, known as Swindon Village Fields. (see the map below).

​The government Inspector stated in her final review of the JCS that the final boundary details be determined in the Cheltenham plan.  So again, our little team had more than a years’ worth of work reviewing, and discussing the details of that plan and other related topics (including as the need for improved road infrastructure to support the growth of the whole town) until the final plan had to undergo another Government Inspector review to ensure that it was sound.
This all seemed fine, until the day in February when I represented Save the Countryside and the Parish Council on the topic of Local Green Spaces. To my horror, instead of following on the decision of the previous JCS inspector, the new Inspector decided to re-open the whole topic again.  Luckily all the work we had done over the years, proved invaluable once again as I argued our defence for our precious local green space against the protesting legal team representing the various developers.  Topics of wildlife, history, wellbeing and beauty were regurgitated once again.
Despite me getting the last word in, it is another waiting game to see the outcome of this Inspector’s hearing.   I hope that this exhausting process won’t hang on for much longer.  A big thanks to Arran Stibbe and the Save the Countryside team for all the work that has gone into this.
I hope to be able to share more news when we have our annual walk on Sunday 19th May
I look forward to seeing our merry crowd of walkers on 19th May for our 12th Annual walk.  It is always a lovely community event. Thanks to my new spine hardware, I shall be able to do the walk this year, meaning I’m on the look out for a new tea lady!